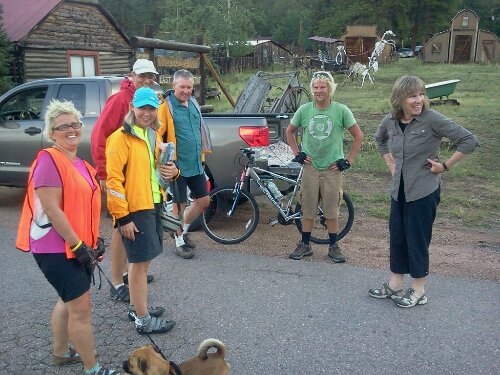 Congratulation to Rich & Peter for completing the TransAm.  I enjoyed the 52 days & six states pedaling along this route and would have loved to have been with them this year as a finisher.  I can at least say that I ended up in a better place than the Tour de France rider this year who did not finish because he was catapulted into a barbed wire fence @ 25 mph after an idiot driver in TV car veered into the peleton causing a massive pileup.  Ouch!

I join Rich’s comments about the people we met. There is no way to try to do a wrap up would make sure to include the generous angel of Afton, VA, June Curry, but also the strange clerk @ Master Bait & Tackle with no water for bikers “because it comes from a well”.

We were both very pleased & surprised by how many folks helped us in ways large and small. In particular I was amazed by how considerate the drivers, particularly the truck drivers, were in giving us plenty of room while passing.

Finally, I wanted to give one more toast to a pair of the most determined riders we met (see photo) Spence & Natasha & their very vocal dog Sebastian.  They survived a broken axle & terrible weather including a time when they pushed their bike for 10 miles in the heat until a driver in a pickup gave them a lift.  They never complained and were as hardy as anyone else we met on this trip.

If you enjoyed this article, please consider sharing it!

Use the form below to search the site: